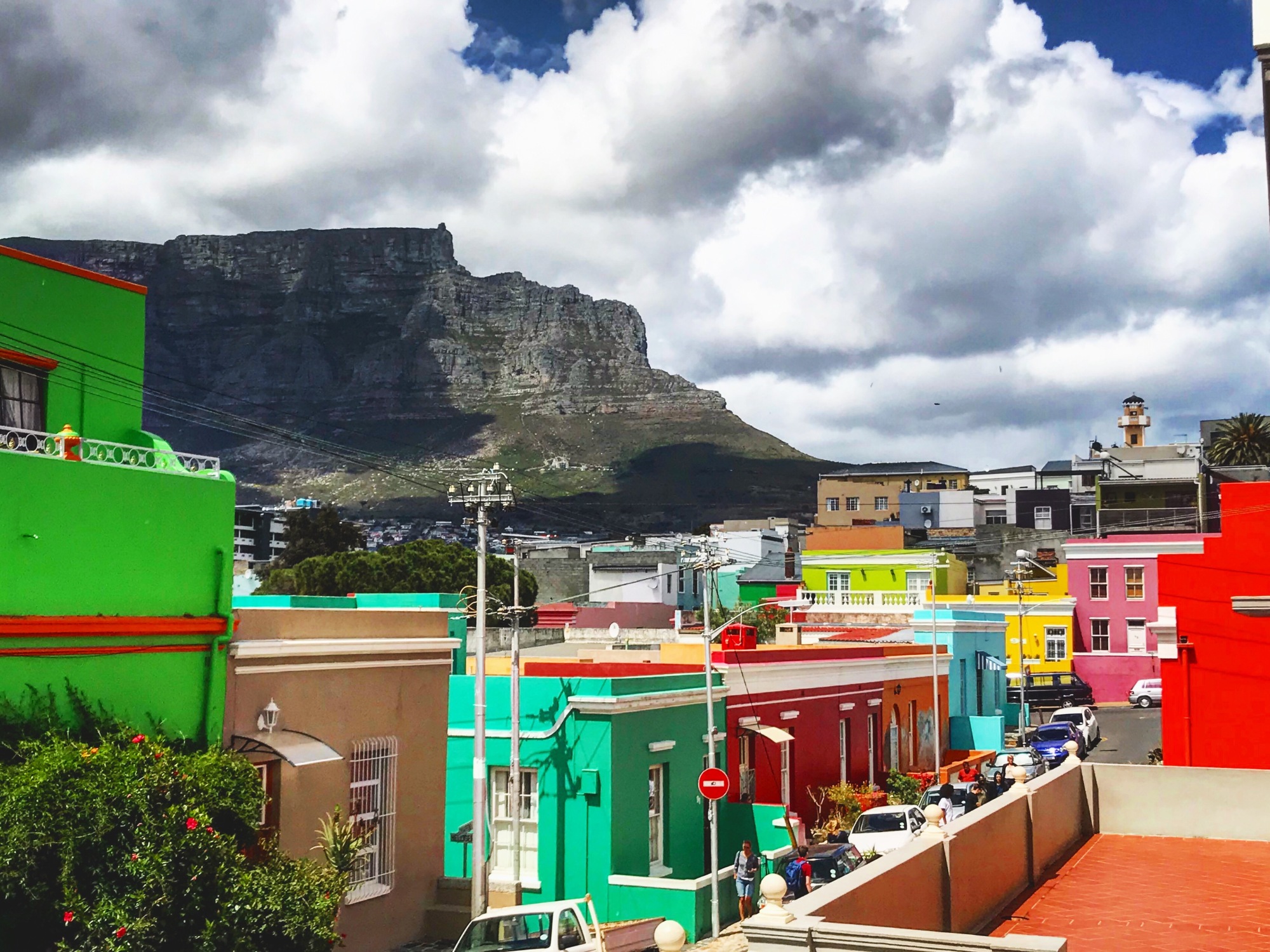 We made it – our LAST NIGHT IN A TENT! Camping probably isn’t in A’s itinerary again for a while.

We crossed the border into South Africa that morning with approximately 500kms ahead of us. The roads in South Africa are on par with any developed country and so it was a day of taking in the scenery. As we drove through the wine region of South Africa, the various fauna such as gum trees and shrubbery reminded J of Australia. The Australian fauna was introduced to South Africa towards the end of 18th century around the time of British settlement in Australia. There were a variety of economic and aesthetic reasons for the introduction, but the eucalyptus in particular was believed to assist with draining wet lands and helping with removal of malaria.

At approximately 4pm we arrived at our campsite, Marcuskraal in Cederberg, for our final night with the tour group. The owners of the chalet and campsite run a family farm which mainly produces citrus and rooibos tea. The rooibos (Afrikan for “redbush”) plant is endemic to this region of South Africa, with past attempts to grow it the United States, Australia and even China have all failed. Rooibos is caffeine free and has been growing in popularity around the world. It is estimated that Rooibos is a R600 million industry.

Heading into Cape Town the next day we stopped at Fairview Wine & Cheese, a vineyard and goat farm. We sampled a selection of cheese and wines (although after being in Bordeaux this didn’t quite compare) before our first stop in the city, Table View. It is hard not to love the city as you drive in, not often do you see an urban city with mountain in the background and beaches! Table View is a West Coast suburb of Cape Town and named after its view of Table Mountain. We then headed into the city and said goodbye to the tour group at the Nomad offices, which was conveniently located around the corner from the apartment we rented for our stay in Cape Town. After 41 days of being on the road, with usually only one/two nights in the same spot it was a nice change of pace to be in Cape Town for four days (the apartment, air conditioning, bed and hot shower were also a huge plus). Our apartment was located on the corner of Strand St and George’s Mall which was in walking proximity to all the downtown areas. We grabbed a late lunch at Tiger’s Milk on Long Street – one of the major streets in Cape Town known for its Victorian buildings and restaurants/bars. We enjoyed the simplicity of being back in a city and being able to walk around and explore. Of course this also meant getting back to a regular fitness regime, which J got A to agree to with a promise of sushi for dinner. Cape Town has some great sushi restaurants which we have missed since being on the road.

The next day we planned a great white shark cage diving trip. There are really only 3 destinations in the world where you can dive with the great white sharks. These include: Guadeloupe Island, Mexico (accessible from San Diego, California); Neptune Islands, South Australia; and the southern tip of South Africa around Cape Town, which is the area most folks know. For this trip we booked with Marine Dynamics in Gansbaai – the sister operation of Apex Shark Expeditions which is the company owned by Chris Fallows (a world renowned shark conservationist, photographer and was the first to film the great white shark breaching).

The dive was off Gansbaai, 2.5 hours southeast of Cape Town, as False Bay (another popular spot) was out of season for the great white. As we headed out of the city center we passed by some of the shanty towns of Khayelitsha, Site B and Maccasar. These areas stand in complete contrast to the some of the modern gated communities located immediately on the other side of the highway. It presents quite the image of impoverish housing with inadequate infrastructure, but many still seem to have satellite dishes to enjoy the modern day luxury of cable TV!

5 kilometers from Gansbaai we stopped at De Kelders which is known for some of the best land-based whale watching in the world. The area is known as a stopping point for the mothers to train their calves before they embark on their long ocean migrations. Sure enough the cliff viewing area didn’t disappoint as within a space of approximately 200-400 square meters we could see over 10 Southern Right Whales. Unfortunately we had to head to our cage dive expedition so our stop with the whales wasn’t nearly long enough. We could have easily stayed for hours watching the whales!

After we checked in with our cage dive operator, we had lunch and watched a safety video (apparently you have greater odds of being killed by a toaster than a shark attack). Then we were off on the boat. It was a quick boat ride to get out to the diving spot and as the crew chummed the waters we all got geared up in our 7mm wetsuits. The water was a chilly 16 degrees celsius. As we waited for our turn in the cage, the marine biologist on board (a native Australian) was telling us about the orca issues they have been having throughout the year. Since May there has been several instances of dead great white sharks washing ashore due to orca attacks, which has resulted in scarcity of great white shark sightings since. At one point during the summer there wasn’t a great white sighting for 5 weeks. On our trip it had been 15 days since the last great white shark sighting. We were unfortunately not lucky enough to see the great white sharks, but we did see approximately six copper sharks (aka bronze whaler), with the largest one being over 4 meters. Even without a great white sighting it was quite the experience – getting into the cold waters with limited visibility, waiting for the sharks to get close to duck beneath the surface and spot them face to face!

That evening once we got back into Cape Town we went to Mama Africa for dinner. This restaurant serves traditional cuisine with a live Marimba band entertaining in the background. Making the most of the opportunity we enjoyed some crocodile kebabs, bobotie and kudu steak. Aside from the cage diving we didn’t have an agenda for Cape Town, between wanting to relax and only having a few days before heading to South America. We will definitely be back to check out the full range of activities the city and the country of South Africa has to offer (to do it justice you would need at least 3 weeks).

The next day we spent exploring the city by foot. The weather reminded us of San Francisco between the fog and the fluctuating hot to cold temperatures. This did mean that the cable car to Table Mountain was unfortunately closed on both days we had free due to the high winds and limited visibility. We explored the area of Bo-Kaap, formerly the Malay Quarters known for its brightly colored homes and cobble streets. It also has views of Table Mountain in the background (weather permitting). Between the clouds and drizzle we made it to the De Waterkant neighborhood for lunch at Sushibox and also some manscaping for J who got a much needed haircut. For dinner we ventured back to Long Street and enjoyed tapas at the restaurant Fork. The tapas here had a unique South African twist, including ingredients such as pan seared ostrich and kudu fillets.

On our final day in Cape Town, as high winds once again closed Table Mountain, we had brunch at Jason Bakery on Bree Street. They served brunch just as one would expect to find in NYC. A loved being able to get some avocado toast with a poached egg and bacon! We then walked over to Greenpoint and Victoria & Alfred Waterfront. The historical waterfront has a myriad of shopping centers, coffee shops and restaurants. We stopped at the V&A Food Market, which houses different food vendors in this multi-level complex (most of the vendors take cash only). The few days in Cape Town gave us a great feel for the city and we can’t wait to return as there are so many things the city has to offer.

Reflecting on our time in Africa, it was quite the journey! There were some questionable moments “of what are we doing here”, but those were definitely overshadowed by the breathtaking sights, amazing wildlife and culture we have had the privilege of experiencing. We can’t wait for our next Africa adventure, but next time for A’s sake it’ll definitely be in a bit more luxury. That being said we tried to summarize this experience: 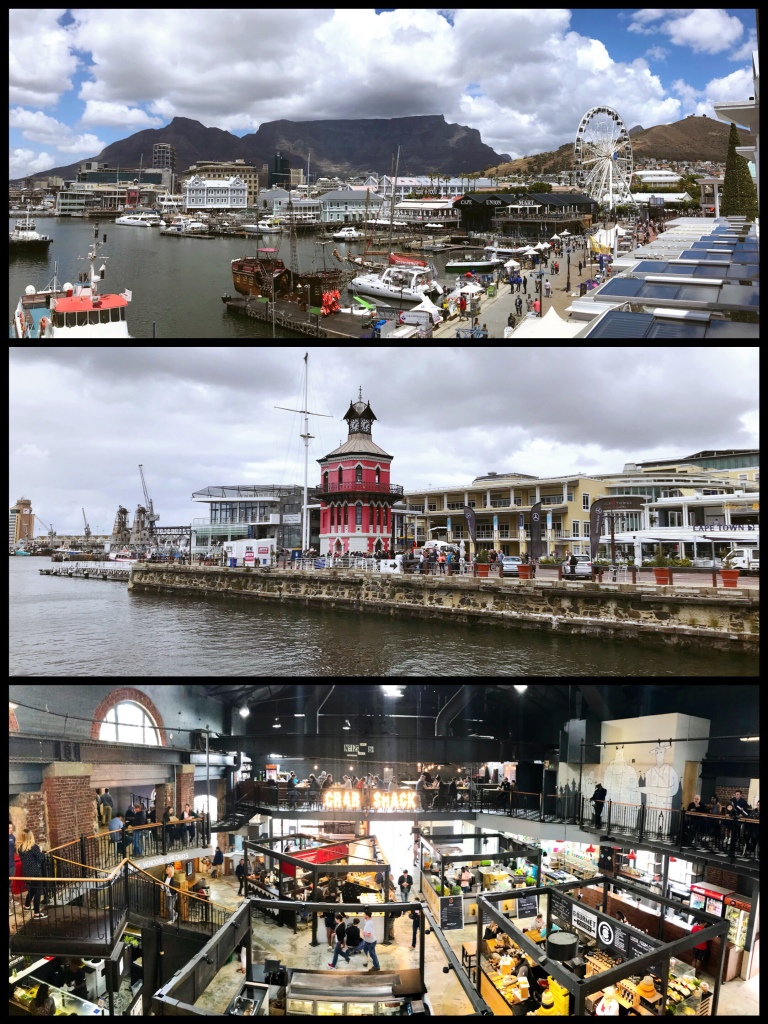