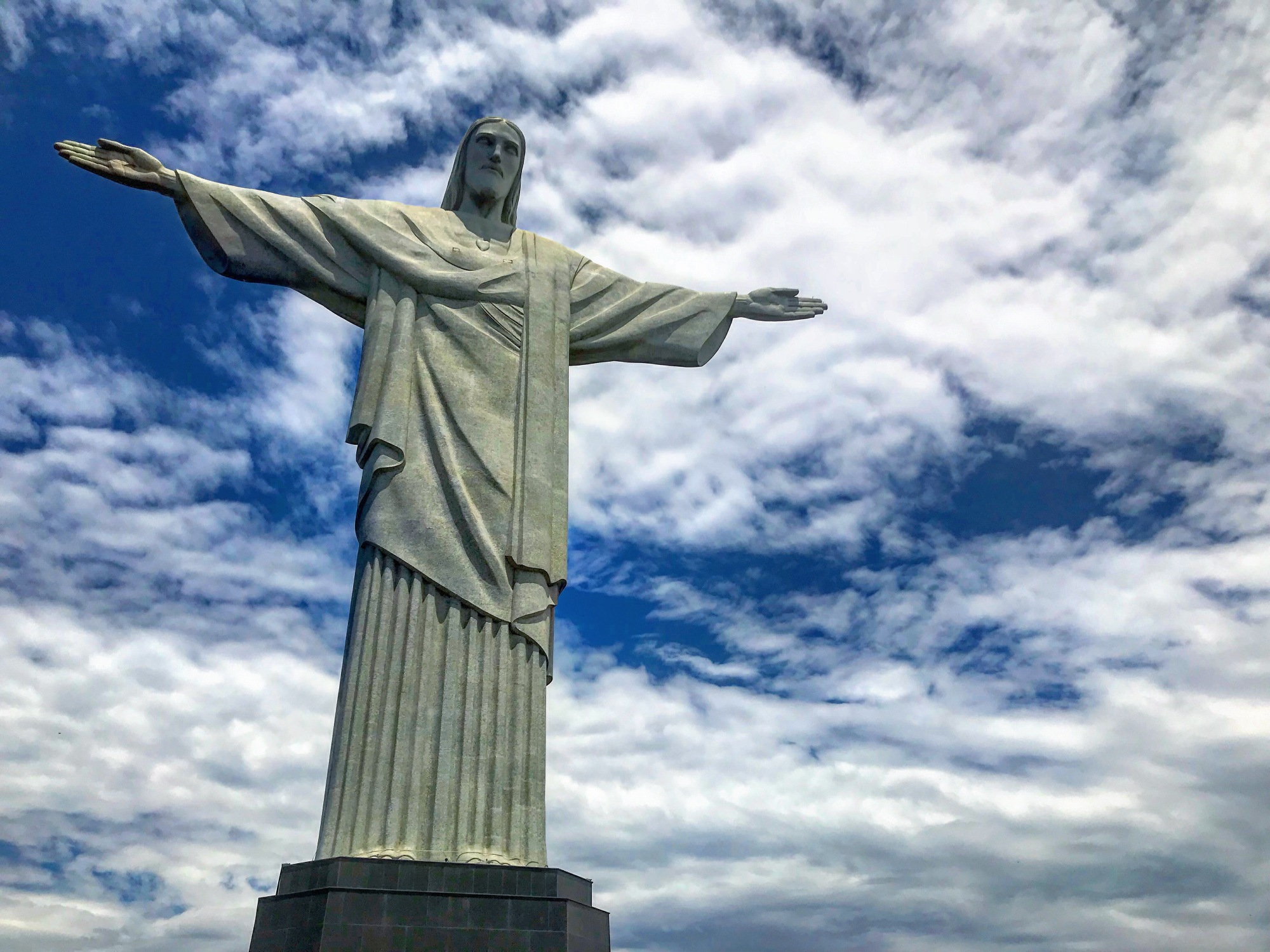 In researching the best way to get from Africa to our next destination – South America, J found the only airline that seemed to take a direct flight path over the South Atlantic Ocean was TAAG Angola Airlines. Uncertain of the reputation and safety of TAAG, we went with a slightly longer flight itinerary with Emirates via Dubai. It was a full travel day with an 8 hour flight from Cape Town to Dubai and then 15 hour flight from Dubai to Rio de Janeiro.

Arriving in Rio de Janeiro in the afternoon, we took a taxi to our hotel at Copacabana beach. Conveniently you can pay for the taxi by credit card at the airport. There is Uber in Rio as well but for some reason there weren’t any vehicles near the airport. Uber has had a difficult time integrating in Rio with reported attacks against drivers and recent protests by taxi drivers. We did manage to use them once we were in Copacabana though with no issues. To try and beat our jet leg we enjoyed a latte at Sofa Cafe and sampled a tapioca crepe and jam. A tapioca crepe is a common Brazilian snack made from the starch extracted from cassava root, it can be served with savory or sweet toppings.

Later in the afternoon we explored the main street along the beach, Avenue Atlantica, which looked exactly like all the postcard pictures. That evening we enjoyed sushi for dinner at Aloha Sushi. Brazil is home to the largest population of Japanese people outside of Japan (approximately 1.5 million), so sushi restaurants can be found throughout the city! Brazil is also known for açaí, which is made from frozen and mashed açaí palm fruit. It is typically served as a smoothie or in a bowl with toppings such as banana, granola and strawberries. Nearby we found Maria Açaí, which had build your own açaí bowls with tons of toppings to choose from – this became a daily fix for us.

With sunny skies the next morning we decided to explore the area by foot and soak up some sun on the beach. We didn’t find the beach particularly relaxing as there were numerous people trying to sell you everything from mojitos to sunglasses to beach wear. The strong winds that day didn’t help much either! Luckily we found that the rooftop pool at our hotel to be a great alternative.

The next day as the sun was out again we headed off to see Christ the Redeemer on Mount Corcovado. The iconic statue of Jesus Christ was completed in 1931 and stands at 30 meters tall with its outstretched arms spanning 28 meters horizontally. There are various options to getting up to Christ the Redeemer (train, hike, hire Uber/taxi) but for us the easiest option was a van service from Lido Square (less than 10 minute walk from our hotel). The ticket includes the van service to the statue from the entrance at Painerias, as only authorized vehicles are permitted up to the base. Once arriving at the base we climbed over 200 steps to tourist chaos! The base was absolutely packed with tourists and selfie sticks! It was quite amusing seeing all the poses people had to strike to get their perfect picture with the towering statue. There are even mats for people to lie down for that perfect picture. Even with all the chaos it is hard not to appreciate the iconic statue and the amazing views of Rio from the platform. Once we were back in Copacabana we had lunch at Cervantes, a restaurant known for its sandwiches garnished with abacaxi or pineapple. We tried both the fillet mignon and the ham sandwiches, they were both great and had hearty portions of meat (especially for only $5USD).

The following morning we went on a tour of two favelas – Rocinha and Vila Canoas. Favela is Portuguese for slum and they are known as low income informal urban areas. However, as our tour guide explained and we saw, this was far from a slum! We learnt that over 20% of the city’s population live in favelas – with Rocinha being the largest, which has 100,000 occupants. Unlike most Western cities where the rich live at the higher elevations and enjoy the best views, majority of the favelas are located on the mountain side as this is where the public land is located. It is not uncommon to see favelas on one side of the street and a mansion on the other. The contrast between the rich and the poor is significant as minimum wage will earn someone ~$220USD per month versus some private schools which charge $2,000USD per month to attend! The favelas are an intricate maze of alleys, with Rocinha having only one main street and a few roads. As the people who started to live in the favelas were often construction workers hired to help build and construct the city of Rio, the infrastructure of the favelas are very well built. We even saw intricate mosaics made from leftover materials lining entrances and houses. Our tour guide did a great job of dispelling the various inaccurate media portrayals of the favelas. The large favelas are often run by a drug lord, who often dictates the rules and runs the community. Although some of the favelas around Rio have been “pacified”, they are still controlled by gangs. The Rio government introduced the Police Pacification Unit which aimed to reclaim territories controlled by gangs in the late 2000s. With the corruptions and scandals within the government there is a economic instability in the area. For example government employees weren’t paid for a few months earlier this year (impacting the overall safety of various communities). Although we felt very safe walking around the favelas it isn’t recommended without a tour guide, as the tour companies often know what is happening in the favela day to day. For example three weeks before our visit a tourist was killed in the Rocinha due to a number of missteps. She was with an inexperienced driver who when the police told to stop didn’t and sped along. The vehicle’s windows were all tinted so one couldn’t see the tourists inside and the favela’s drug lord had escaped from prison that day so potentially the police thought he was being smuggled back in. Our tour company actually only started to do tours in that favela again two weeks ago. As it was Sunday we got a chance to walk through the local market in Rocinha, where you could buy all types of fruit and meats. It reminded us of markets in SE Asia with large raw cuts of meat hanging fin some stalls. The people of the favela are very entrepreneurial which makes the community self sustaining and now home to a large middle class population. However most of them choose to stay in the favela due to their ties to the community. We also walked around Vila Canoas a smaller favela beside a luxurious golf course. Here we also tried a caipirinha, Brazil’s national cocktail, made with cachaça (sugarcane hard liquor), sugar and lime. The tour was very eye opening and it really dispelled how favelas and its inhabitants are portrayed in the media.

We viewed the city from another vantage point later that afternoon at Sugarloaf Mountain. We took an Uber to the ground station at the base of Morro da Babilonia where the first cable car took us to Morro da Urca at 220 meters high. The next cable car took us to Sugarloaf’s summit, the highest point being 396 meters high. With fog and drizzle starting to rolling in we waited to take the cable car to the summit until it cleared. As we got to the top we managed to get glimpse of the panoramic views between the fog sweeping through the area.

Luckily we got most of the sightseeing in as the next day was cloudy and rainy and therefore we retreated indoors to the Rio Sul Shopping Center. This could have been a mall back home, with stores like Zara, Sephora and Forever21. It even had a BodyTech which is like the Equinox of Brazil. We made a quick visit to the gym and we treated ourselves to Brazilian all you can eat, churrascaria. Churrascaria Palace, a restaurant which since 1951 has been serving meats from fillet mignon, lamb shoulders to prime rib and offers a selection of seafood and sushi. Although on the expensive side, we figured this was a must in Brazil and the food was delicious. We had also noticed with our meals being served a yellow powdery dish, which we learnt was farofa. Farofa is a toasted cassava flour mixture, which is either be sprinkled on ones meal to their taste, or eaten as an accompaniment in its own right. Most farofas have a very smoky and slightly salty taste, and is used to accentuate the taste of meat.

The following day we took one last walk along the beach before heading to the airport mid-afternoon. Although we didn’t love the city of Rio (compared to other cities we have visited, also the lack of sun limited what we were able to do), it was a good place for us to relax and plan out the rest of our time in South America. 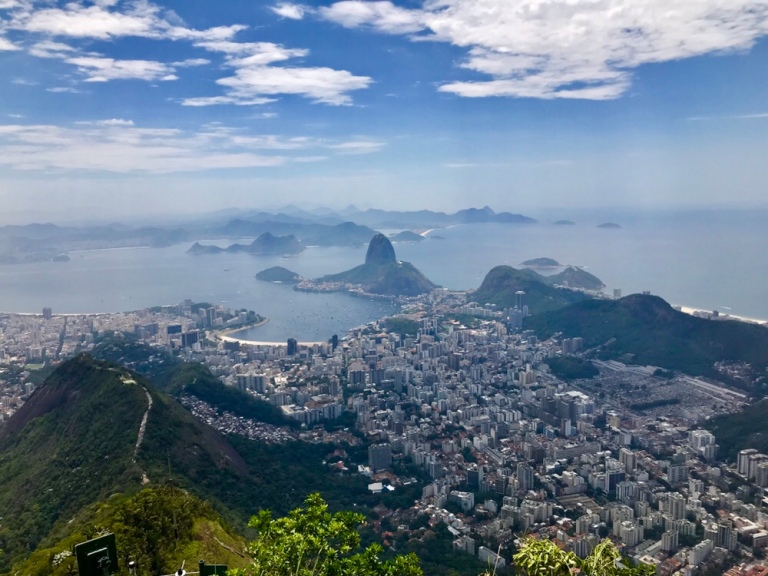 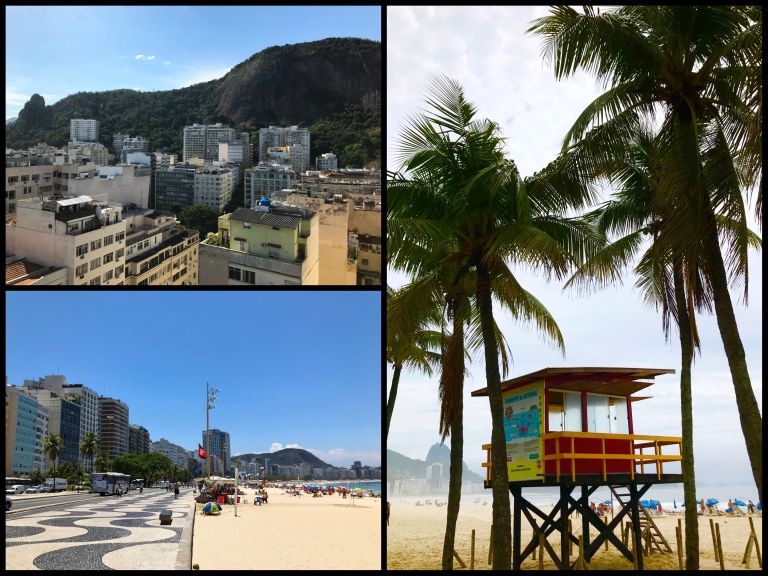 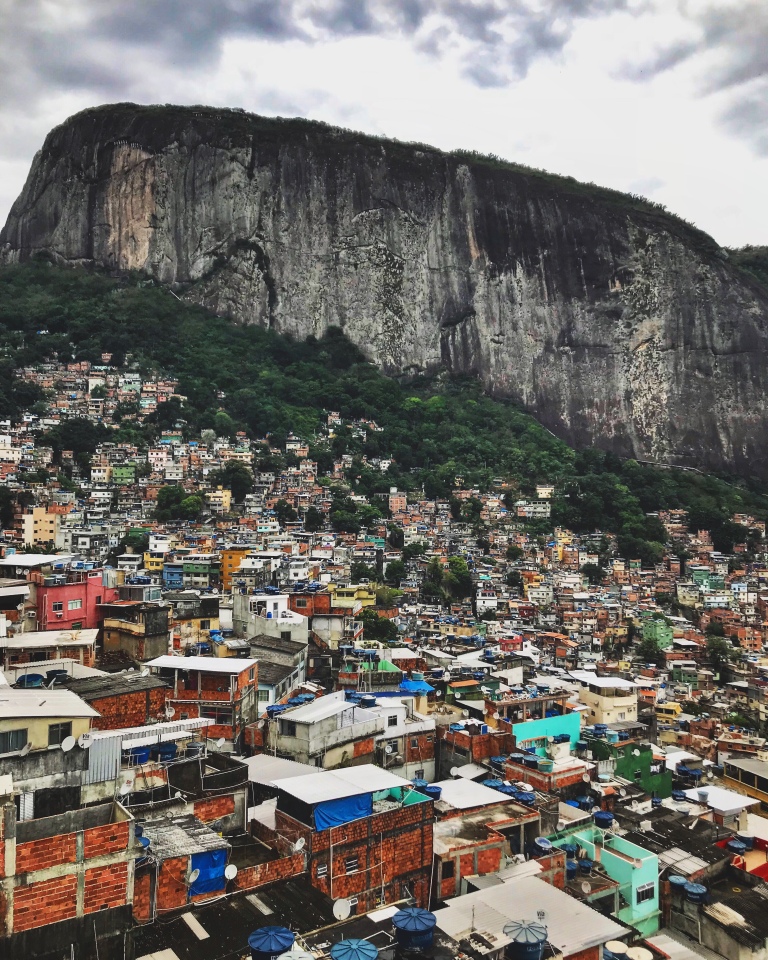 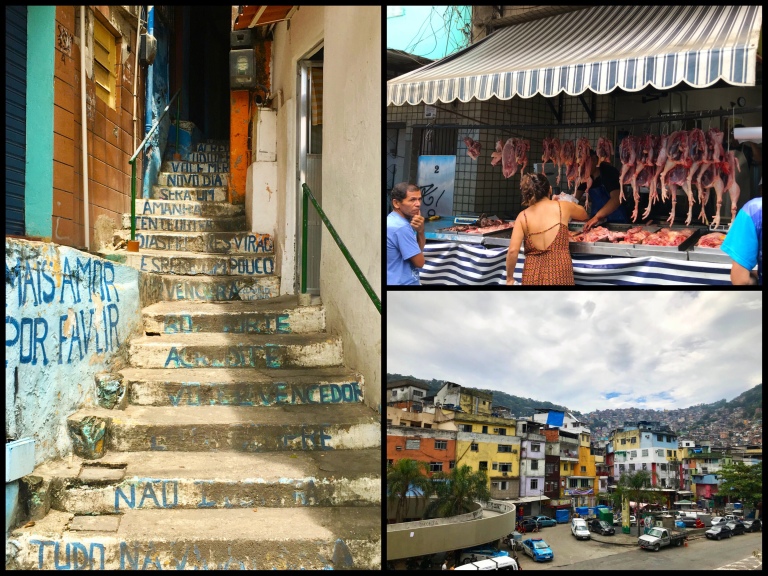 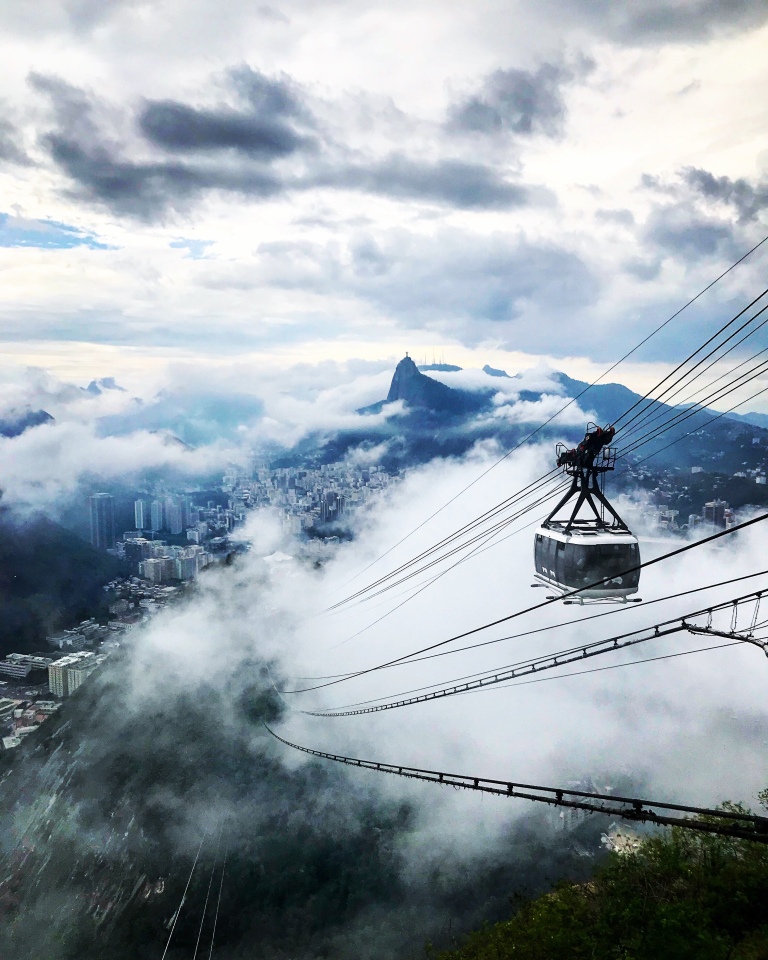 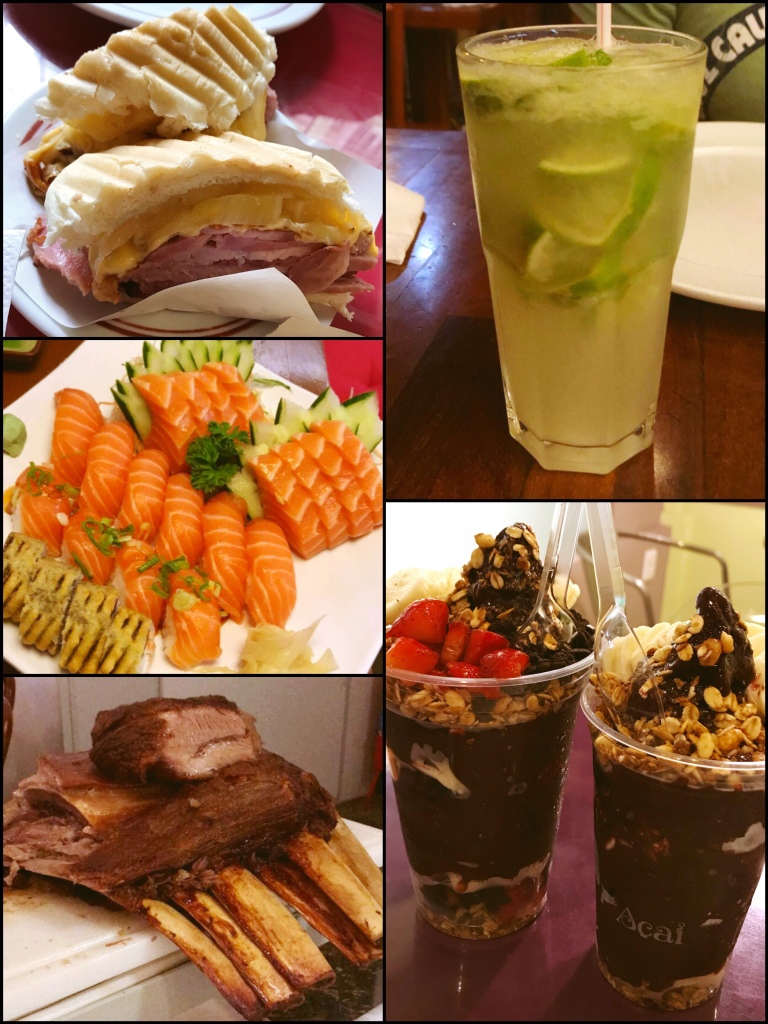