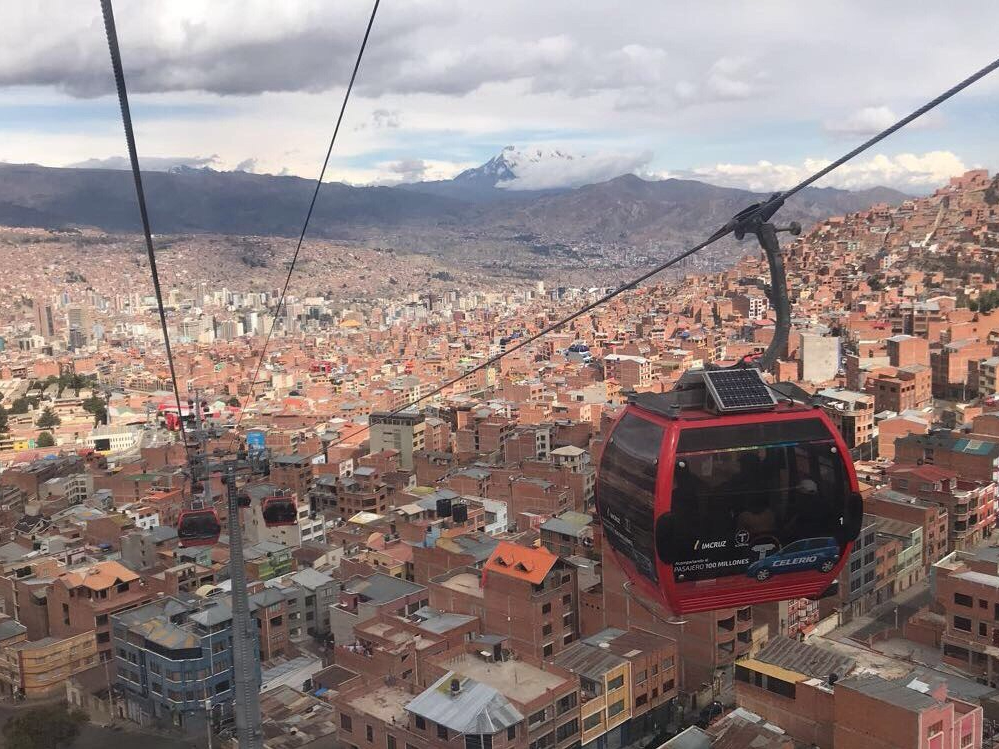 Seeing La Paz in the daylight we were in awe of the sprawling city. The city is set in an amphitheater like depression surrounded by high mountains. From El Alto City located in the highlands at approximately 4,100 meters to the southern part the city where the wealthy reside, the altitude changes by over 900 meters!

We took it easy in the morning, relaxing and mapping out our plan for the next few days. J coordinated his death road trip. Although A wasn’t up for the tour, luckily J found a companion from our Salt Flats tour that was looking to do the trip. For lunch we found a cute restaurant called Cafe del Mundo, where we could satisfy our latte cravings. We also enjoyed a hearty sandwich and tried a llama burger.

That afternoon we joined a tour on the cable cars which link up the city of La Paz. The system, called Mi Teleferico, is the first urban transit network to use cable cars. With five currently operational lines and six more planned, the system has been helpful in cutting down travel time around the sprawling city. We started on the red line which took us up to El Alto. On route we passed over the city’s huge cemetery, which consisted of numerous buildings, three to four stories high, with walls containing hundreds of compartments. Our tour guide also explained to us why so many of the buildings had an exposed red brick facade. The reason being is the government imposes a tax on completed buildings, therefore people don’t paint the outsides of the buildings so they are not consider finished. This is contrasted by the fully painted buildings when we headed to the southern part of the city (the richer part of the city). Once at El Alto we walked by the witches’ market. Unfortunately it was not a Thursday or Sunday, so we weren’t able to check out the El Alto Market. Apparently this open air market is one of the biggest in Bolivia where you can find everything from car parts to clothes. From here we took a minivan across a few neighborhoods to the yellow line. The minivan reminded us of the dala-dala we took in Arusha, Tanzania, except this one wasn’t packed with 20+ people! One of the most interesting sights were the zebra mascots helping pedestrians cross the road. The government started the zebra crossing system to assist in educating motorists on pedestrian walk ways. We saw them energetically stopping traffic throughout the city (and always willing to pose for a picture). The yellow line connected to the green line which took us to the southern part of the city. This was the modern and wealthy part of the city where you could see the change in the architecture. The mansions that lined this area was a stark difference to the unfinished multistory apartments we saw previously. We then took a minivan back into the city. The tour was a great way to see the city from a different perspective and have the benefit of a tour guide.

The next day J headed off early on his Death Road Tour with Ride On Bolivia. Upon leaving La Paz the road first ascends to around 4,650 metres (15,260 ft) at La Cumbre Pass. At the La Cumbre Pass the scenery is spectacular with snow capped mountains, before it then descends through a rainforest to 1,200 metres (3,900 ft) at the town of Coroico. Part of the ride is on the “World s Most Dangerous Road,” dubbed such by the Inter-American Development Bank in 1995, and locally known as “The Death Road” or “Camino de la muerte!”. The mountain biking excursion takes approximately 5 hours with many stops and photo opportunities along the way. The most dangerous part for J was returning to La Paz in the evening (by bus) where you reascend on the newly constructed road, which is colloquially known as the new death road by the locals.

A spent the day on a free walking tour of the city with Red Cap Walking Tours. The group started off Plaza San Pedro where we learnt about the infamous San Pedro prison. The prison is known for being a society within itself. Prisoners have to buy or rent their cells, often have jobs inside the self contained community and women and children live within the complex. Although tours are illegal (it used to be listed on Lonely Planet as a top activity in La Paz), you can get a good idea of the unique inner workings of the prison from the book Marching Powder. The book describes the experiences of British inmate Thomas McFadden who was known for giving these tours. The tour then took us through Rodriguez Market where we walked through the various stalls selling fresh fruits, vegetables, meat and seafood. Our tour guides explained to us proper etiquette for buying goods and building loyalty with the cholitas. We also learnt the story behind the bowler hats which is an integral part of the cholita’s traditional dress. The story goes that shortly after the bowler hats were invented, two brothers were manufacturing a line of bowler hats. Their plan was to sell them to the British railway workers who were working in Bolivia at the time. However, when the hats arrived to South America they found that they were way too small to fit the heads of the men. So, instead of throwing them out they decided to create a “fictional” story to tell the Bolivian cholitas. This story was that all the fashionable women in Europe were wearing these bowler hats and it was the new fashion trend! We then headed to the Witches Market where you can find items such as potions to dried llama fetuses. The llama fetuses are buried beneath the foundations of many Bolivian houses as an offering to the Gods. Urban legends say that the skyscrapers (and other larger construction projects such as the cable cars) require more than just a fetus and that human sacrifices occur! We walked by the San Francisco Church on route to Plaza Murrillo, the center of the city and Bolivian politics. Our tour guides also educated us on the current political unrest. Eva Morales, the current president, who has been serving since 2006, had just confirmed his run for the 2019 elections. The previous evening the country’s highest court overruled the constitution, scraping term limits. As such there were significant protests in the city that day, we heard firecrackers going off and there was a heavy police presence in the plaza. Morales, is the first president from the indigenous population and his administration has focused on integrating the various communities of Bolivia. However, he is known to have some quotable public statements and policies – such as blaming ones diet of chicken to the increase of homosexuality and baldness! Or when he decided to help increase the country’s population by banning condoms and taxing women over the age of 18 who weren’t pregnant! Albeit entertaining, it did highlight the political instability the country is facing and will continue to experience leading up the the elections. The 3 hour tour was very informative and a great way to learn more about the culture and city. After the tour A met up with a friend from the salt flats tour at Cafe del Mundo, it was a good afternoon of getting to know each other, sharing similar “things we miss” and amazing experiences! 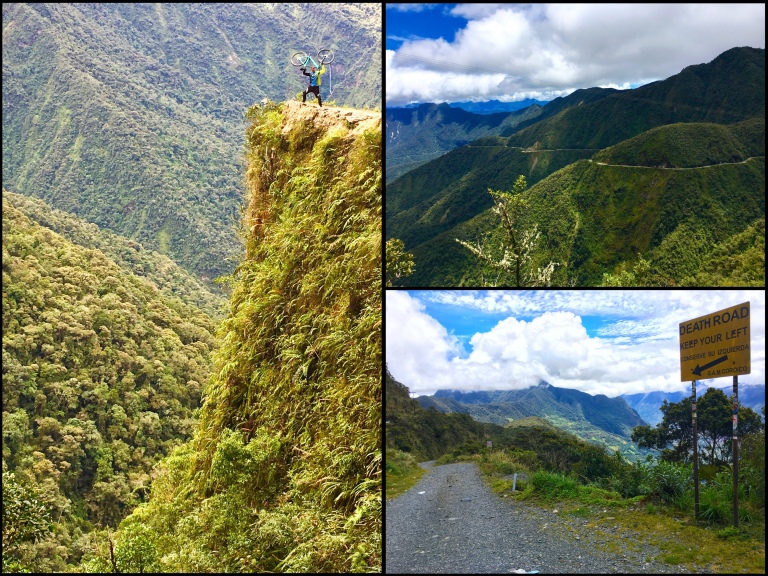